This week is Project AWARE Week. Project AWARE essentially started as a project, partnered with the Professional Association of Diving Instructors (PADI) and now, after rapid growth, is a registered non-profit organisation in its own right with a mission to raise awareness around marine environmental problems.

Project AWARE runs a variety of environmental campaigns, but the one we’re going to focus on today is Project AWARE week which is about ocean pollution, creating awareness for vulnerable shark and ray species, and empowering local communities to take positive actions to protect the oceans.

These environmental issues are things that the Love The Oceans’ team feels very passionately about. We’ve talked a lot in our previous blogs about reducing, reusing and recycling plastics. We’ve also touched on carbon dioxide emissions and how to clean up your act. We’ve talked a little about megafauna and our ethical code of conduct, but this blog will be taking a closer look at the vulnerable shark and ray species LTO works to protect, because after all, we <3 elasmobranchs.

Elasmobranchs are sharks, rays and skates. They’re super cool because well, they’re totally bad ass. Some of the most well-known flagship marine conservation species like whale sharks and manta rays, belong to the elasmobranch subclass. Why do sharks and rays belong to the same subclass? Well, it’s because of their placoid (tooth-like) scales, rigid dorsal fins, and 5 – 7 gill clefts that all open individually to their exterior.

OK, we might be a little bit biased, given nearly every one of the LTO team has been obsessed with elasmobranchs since they were knee-high to a grasshopper, but we really do think they’re super cool. Rays and sharks are cartilaginous fish, which means they don’t have any bones. No, they’re not like Jello, they do still have skeletal structures, but they’re made of calcified cartilage, which gives them more flexibility, allows them to heal faster and gives them less complications when diving to depth.

As well as many other sexy features, including a sixth sense, 3 penises (just kidding, two are claspers), and 15 rows of teeth (that’s some hella love bites!), one of the coolest things is how some elasmobranchs sleep. Some species of elasmobranchs, like Great Whites, are obligate ram ventilators. Basically, during the process of evolution their spiracles have shrunk up real small. Spiracles let sharks push water of their gills without moving. However, since the spiracles on Whites are now useless for ventilation, they have to swim constantly to ensure they get enough water over their gills to breathe. Whilst it means they can eat all the mince pies at the Christmas party they want, it kinda sucks for sleep. They have to swim, while sleeping and do what’s been dubbed ‘sleep-swimming’ where they shut down parts of their brain to rest it while the rest of the brain still keeps them swimming. I guess that means less nightmares?

One of the major problems that face these amazing animals today is, unsurprisingly, humans. Sharks are harvested for their fins, whilst rays are harvested for their gill rakers. Both are highly valued in Eastern Asia, with shark fins being used to show affluence, typically served at important events as a status show. Gill rakers are used more ‘medicinally’, because the theory goes that if gill rakers filter the water of plankton for the rays, if we eat them they must filter our blood of all it’s toxins. Because we all know that’s exactly how science works. Snails produce mucus trails, so if we eat snails we start producing a mucus trail right? Horned lizards can squirt blood from their eyes (yes, that’s actually a thing) so if you eat horned lizards you can squirt blood from your eyes. Beetroot dyes everything red so if you eat beetroot you pee red. Wait, what? That’s a thing? I’m changing my dinner choice.

But seriously, millions of rays and sharks are killed every year for the shark fin and gill raker trade. The current estimate is around 100million sharks per year and approximately 5000 manta rays (that’s just one species). That’s 190 sharks per minute. By the time you’re reading this, 570 sharks have died for their fins to be harvested. And if you’re dyslexic AF like me, probably something like 5700 have died. This is obviously completely unsustainable for a species that is long-living and slow-reproducing. It’s also a massive problem for us humans, who appear to have a habit of dooming ourselves. Not sure why? Read about that here, I’m running out of word count for this blog.

If you’re reading this, hopefully you know a little bit about what LTO does. We do lots of different research including elasmobranch fisheries research. We’re looking at the sustainability of the catches in our area. Unfortunately, as predicted, it doesn’t look good for our local elasmobranch population. We’re working really hard to turn things around for our toothy friends, but you can help out from home too.

First of all, NEVER buy any products with sharks or rays in them. You’d be surprised how many products secretly have them in. Girls, keep an eye out in your make-up products for an ingredient called Squalene – a chemical derived primarily from shark liver oil. Watch out when you get your Friday fish and chips. Your rock salmon could actually be a small shark, like dogfish – also called huss or flake on the chippy menu. Lastly, it might seem obvious, but please don’t buy shark teeth from that nice guy on the beach on holiday. Those shark teeth have come from a shark (said Captain Obvious), so you’re essentially fuelling the shark killing trade. If you really want a sharks tooth, get a fossilised one, or a ceramic one – it looks super real and no animals were harmed in its creation.

What else can you do? Get involved in Project AWARE week and doo some environmental good. Join your local beach clean, reduce, reuse and recycle plastics and buy some merchandise off our website (it’ll make you feel better about all the sharks dying and we remove 2kg of plastic off the beach for every item bought). If you’re eager to get in the water Project AWARE also have a Dive Against Debris speciality you can do which is super cool. Check that out here.

Have an incredible week and let us know what you’re doing to help the marine world this week! Hashtag #lovetheoceans and #AWAREweek to show us what you’re up to. Happy Project AWARE week one and all, from one ocean-obsessed individual to another. 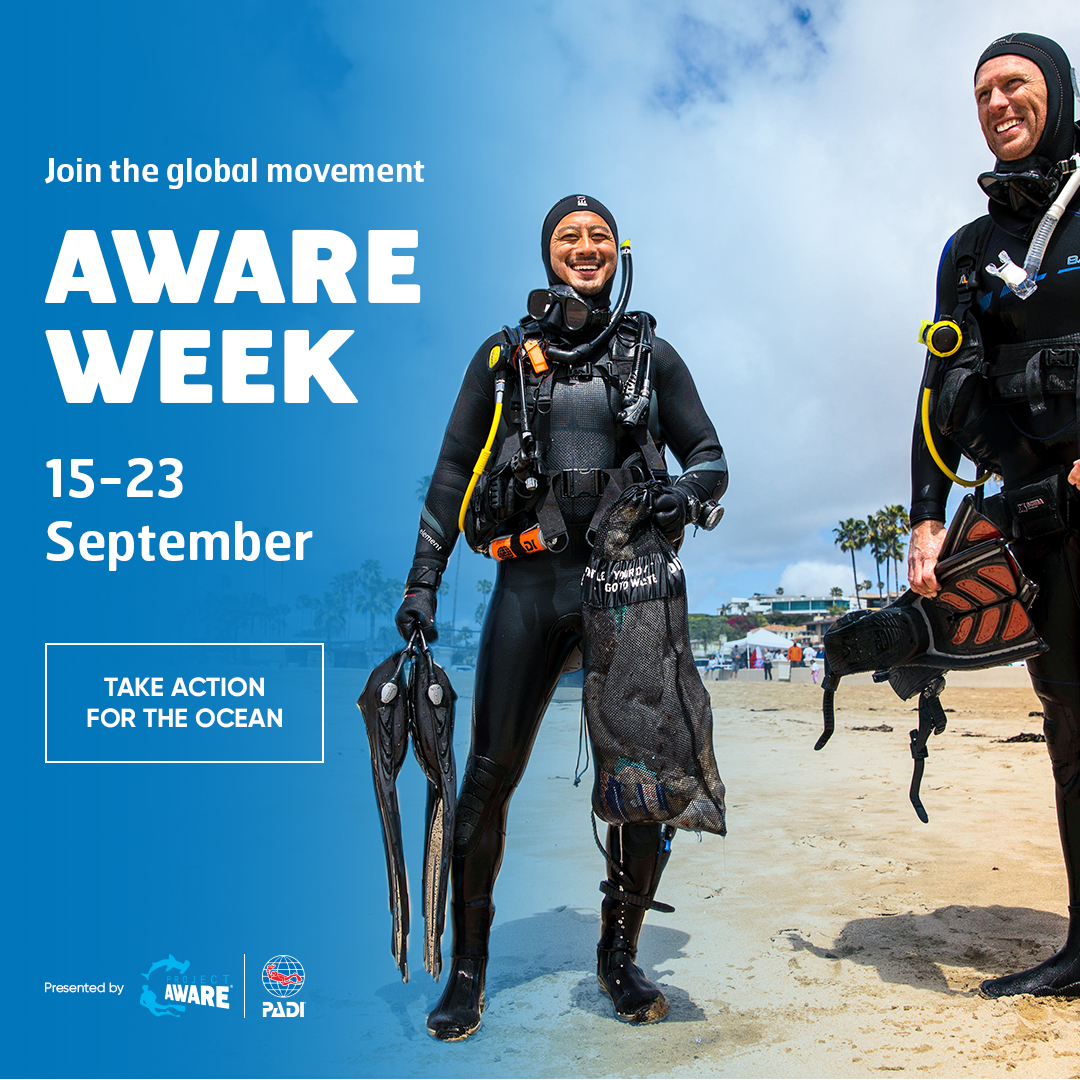 Our Devotion to The Ocean – Deakin and Blue Guest Blog

Shark Awareness Day: Sharks are more awesome than you think!