Throughout 2018 our marine biologists here at Love The Oceans will be doing blog posts on topics of Named Days. To keep up to date, follow this blog, also found under the ‘News’ tab on our website. Without further ado, in celebration of World Animal Day 2018, I introduce our 23rd blog in this marine series:

Fins Up for World Animal Day – Animals are Turtley Awesome!

Happy yet-another-awareness-day! The next up is 4thof October, World Animal Day: The goal of World Animal day is to raise the status of animals around the globe to improve welfare standards.

… Ok ok, so for those of you who are already thinking: “You’re all a bunch of tree-hugging hippies! Animal rights are absolute humbug. I like my steaks rarer than rare, and hunting vegans should be a national sport. Why should I care about World Animal Day and animal welfare?” Hm, well … we might need to have a little talk about stereotypes and tolerance. (And also, animal rights and animal welfare really aren’t the same thing.) But let’s save that discussion for another day. You don’t need to be a ‘tree-hugging hippie’ to care about animals. And no, you don’t have to be an animal activist either. Even if you do like your bacon and steaks, you can still believe in animal welfare. Here is our list of the top 3 coolest marine animals. If this list won’t convince you that animals deserve some attention and respect – nothing will:

As the name suggests this one’s a bit of a show-off; not only is it sporting just as bright, and as many, colours as any other peacock, it also has what are possibly the coolest eyes in the animal kingdom. Most other animals with ‘good’ eyesight have a few different photoreceptors enabling them to see colour (humans have three: red, green and blue). The Peacock Mantis shrimp however has 16! And as if that wasn’t enough it can also see UV light, visible light (quite arrogantly named for what the human eye can see), polarised light and circular polarised light. (Actually, the little bugger also happens to be able to producecircular polarised light with its body for communication. Which is so impossibly weird and cool at the same time, that I’m not sure how to explain it – luckily someone else has done it for me, read more about it here if you feel like getting your science on). All in all, it’s pretty cool. Actually so cool that scientists have decided to replicate these alien-like eyes to make probes to look for cancer cells. Yup, you read right, Peacock Mantis Shrimp eyes can be used to look for cancer. If that’s not cool, I don’t know what is! P.S. If you meet this one underwater I’d recommend keeping a respectful distance – it’s packing quite the punch: Its tiny hinged arms can punch at a whopping 80 km/h, the speed of a .22 caliber bullet (50x faster than a blink of an eye), so it’s a force to be reckoned with.

… or otherwise known as ‘Cute, but Deadly’. With its 12-20 cm size it doesn’t look like much, but it is one the absolute coolest critters you’ll find in the Indo-Pacific: Although looks aren’t everything they certainly are something, especially if you’re a Blue-Ringed Octopus. On the surface they are beautifully white to yellow with 50-60 bright blue rings, but under that there is an extra layer of cool colour. All cephalopods (octopuses, squids and nautilus) have chromatophores, iridophores and leucophores; all different kinds of colour-changing cells that allow them to change colour to camouflage themselves, scare off predators or communicate with other cephalopods. In addition to the looks, the Blue-Ringed Octopus also has the brains – quite literally. Octopuses don’t only have one main brain; they also have eight smaller brains, one in each arm. (Ok, they aren’t actual brains, but big nerve bundles, that function almost the same way as the motor cortex in our brains do. Brains just sound way cooler than nerve bundles). And if the whole brains and brawns combination isn’t enough to sweep you off your feet, this little critter has another ace up its sleeve: It also happens to be one the most venomous animals on the planet. (Ok, maybe not the greatest dating profile, but still pretty cool). 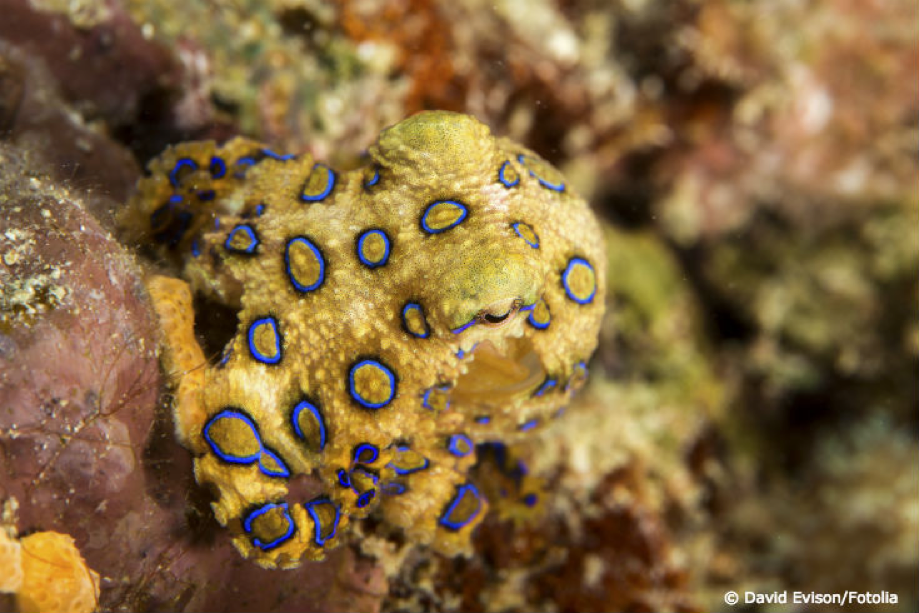 You didn’t serious think you’d make it through this blog post without some shark facts, did you?I think we’ve already solidly established that sharks are pretty cool (otherwise read more here and here), but this one is just extra cool! In addition to skin-teeth, an endless supply of normal teeth, an ultra-light and flexible skeleton, a few ‘super-senses’, and all the other usual shark features, this one also does a pretty neat trick… It walks on land. Ok. Calling it walking might be a bit of a stretch, but it can move around above water for a pretty decent amount of time – an hour to be exact. Epaulette sharks allow themselves to get stranded on top of the coral reefs that they live on as the tide goes out. As the tides goes out lots of fish and crabs get trapped in tidal pools on the reef with no way to escape until the water level rises again. With its prey items conveniently trapped in puddles, the shark simply walks on top of the reef, from tidal pool to tidal pool, snacking on trapped fish and crabs. The pectoral and pelvic fins of the shark have evolved allowing them to turn and push off of the reef, exactly like if they were feet. Ok, that’s the walking part explained, so how does it deal with the being out of water part? Without water around its gills, the shark can’t extract oxygen and breathe, so instead the shark simply reduces its oxygen consumption (easier said than done) by slowing its heart rate and shutting the body down, one organ at a time. The epaulette shark is even capable of shutting down part of its brain to minimise its oxygen consumption! So … essentially, it’s half-dead. I don’t know about you, but to me being able to walk, hunt and feed while being half-dead sounds like quite the accomplishment.

Ok, so what’s the point of this blog post? Well, we’re not an animal welfare or animal rights organisation, but we do believe animals are incredible and deserve to be treated as such. Hopefully this blog has put a smile on your face and reminded you that there are some pretty cool critters out there. And if we’re even luckier you might even want to do your bit to make the world a better place for animals. Since we are a marine conservation organisation, we recommend starting by choosing sustainable seafood (no one wants tinned tuna with a side of dead shark, turtle and dolphin), ditching single-use plastics (plastic bag-eating turtles just really aren’t cool) and refusing products that contain parts from sharks (look out for squalene in cosmetics, rock salmon/pollock in your fish & chips, chondroitin supplements (come in shark and non-shark versions), shagreen (shark skin leather) and shark-based fish meal in pet food). And on that note, I’ll go feed my dog some shark-free pellets. 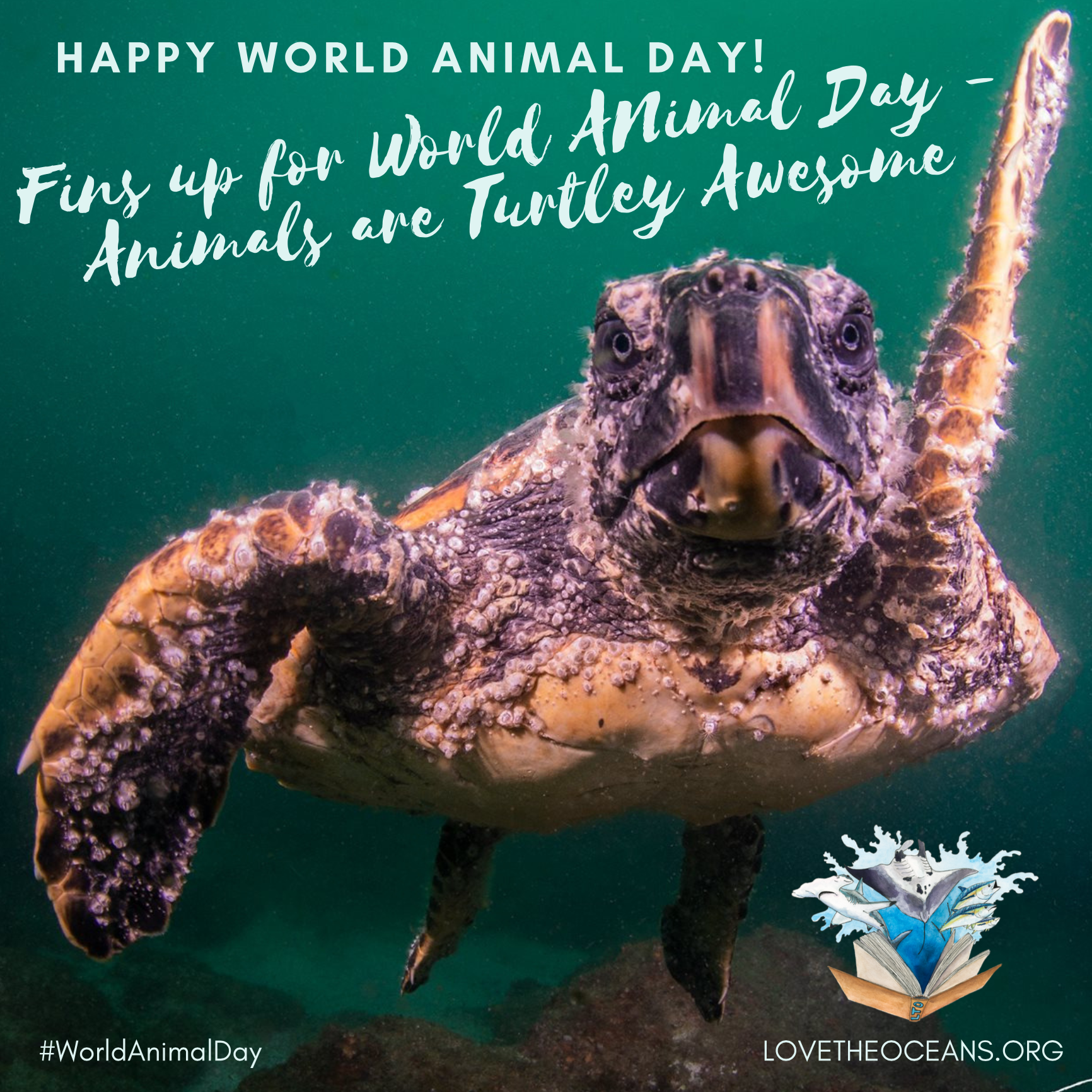 PROJECT AWARE WEEK: LOVE THE OCEANS WITH YOU FINS ON AND FINS OFF